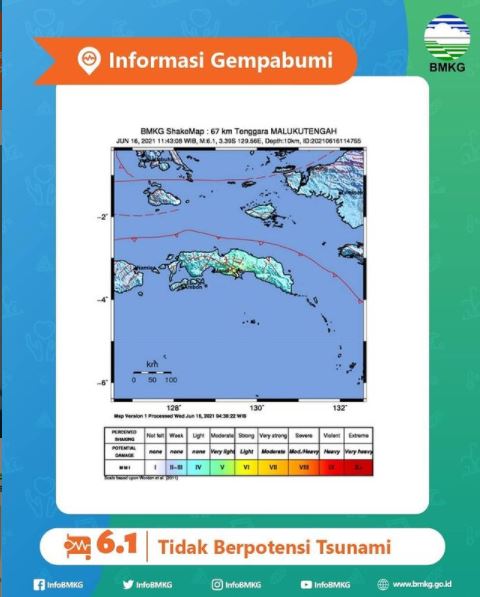 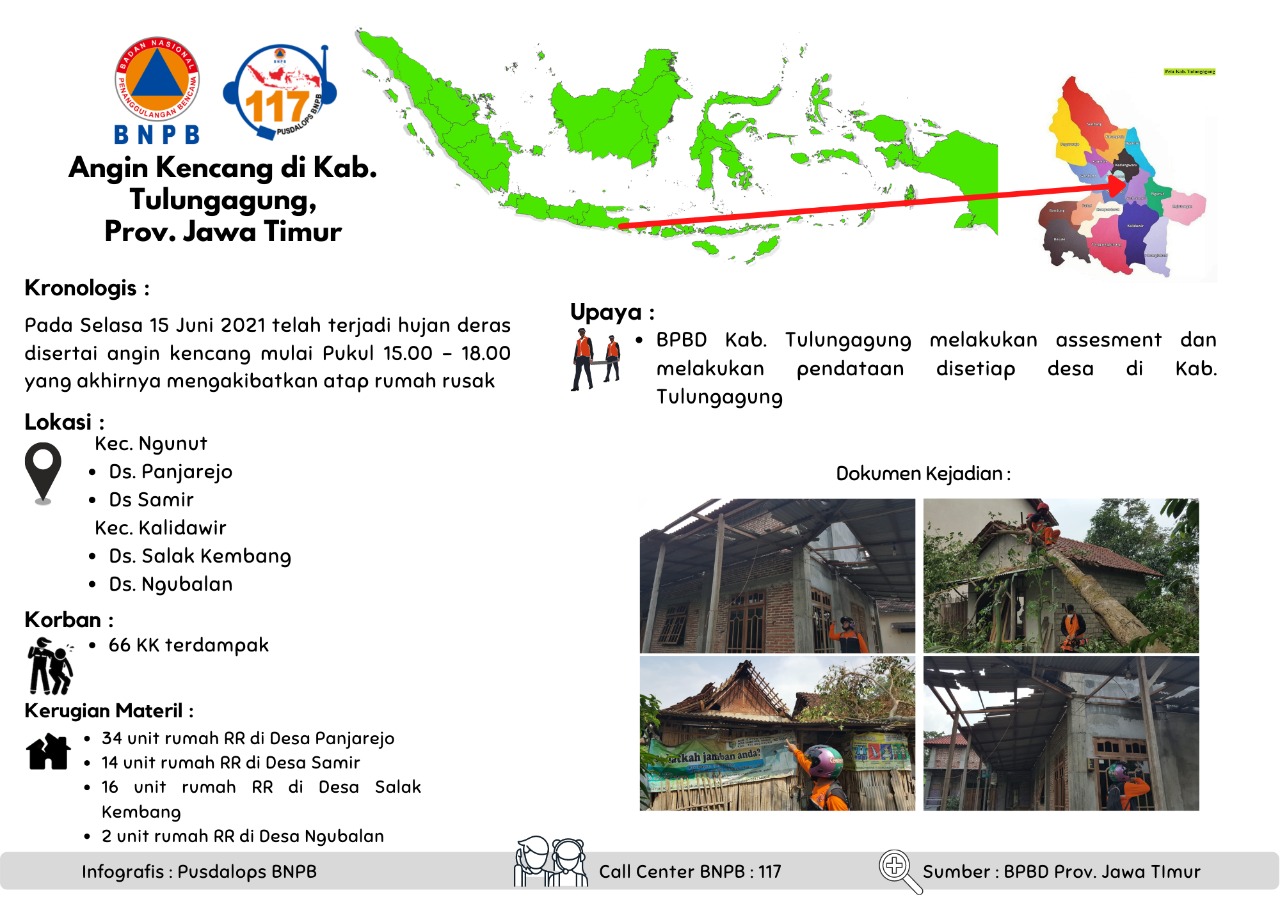 Two fishermen were reported missing at sea off the coast of Thai Binh Province. Two ships from the Border Guard are assisting in the search and rescue. <br /> <br /> Vietnam Disaster Management Authority (VDMA) reported over 130 homes damaged, mostly as a result of strong winds, including 21 houses in Ha Nam province and 104 in Nam Dinh province. <br /> <br /> The storm also brought some heavy rain. In a 24 hour period to 13 June 2021, 321 mm of rain fell in Dau Lieu in Ha Tinh Province, and 240 mm in Vinh, Nghe An Province. <br /> <br /> As of 13 June, damage from flooding was mostly limited to farmland and crops. VDMA said a total of 19,733 hectares of farmland was flooded, including 15,400 hectares in Ha Tinh Province and 3,463 hectares in Nghe An Province. <br /> <br /> Vietnam’s National Centre for Hydro-Meteorological Forecasting (NCHMF) warned of possible further flooding in northern provinces, in particular in Thanh Hoa and Nghe An Provinces, and also in Ha Tinh province along the La River.

Xayaboury province lost almost 100 billion kip from flood <br /> ……………………. <br /> From June 11-14, 2021, there was a heavy rainfall due to the impact of the storms (storms) and the southwestern winds have been covered in Xayaboury province with all the floods, land floods, floods, flooding, floods, towns, and cities, and towns, 100 cities, cities, cities, and cities, cities, city, cities, cities. Billions of kip. In that Xayaboury city has more impact than friends. Coming on June 16, 2021, Mrs. Baikham Khutthiyya, Ministry of Labor and Social Security, Deputy Commissioner of Central Stage Management Committee. Representing the central disaster management committee has looked at the damage of the flood affected villages in Xayabouly, by welcoming Mr. Phongsavanh Sithavong, Xayaboury Province with the leadership of Xayabuly Province and Xayabuly. <br /> This opportunity, Mr. Phetpixay Center, Governor, Provincial Board of Directors reported all the damage of floods, you said: The implementation of the development of the immigrant's development, the district's council, the government's management, the government's 30th, the government ' system has been reportedly destroyed, and the government's workforce, and the 1.250th of the government has been done to the government, the government, and the government is the government's responsibility of the government's issue of the government, and all the government, the security forces of the government, 1.250 The number of 7 lmfao. Together, Luang Prabang's leadership sent disaster management team and rescue unit, underwater military forces with towers and trucks to help, solved all kinds of clothes, rice, dry food, drink and drink from all parts to help. <br /> For the damage from importing information including 56 homes, 5.248 families, 20.992 people, 8.920 women (exclusively Xayaboury affected 39 villages), including all the damage rates in the province from the initial evaluation of Xayabouli province are 94 billion kip, have a house of 19 people, including 4.221 houses, 19 people in 19 After being swept away, power cut homes (homes can be fixed, 9 houses left, lights have been cut off), units flooded (in this one can't be used), trees and lights are cut off, spots, lights are off, points restored, 1 Dots, water smoker flooded across Xayaboury city can't use paparazzi water, all lines, direct bridges, dallo, pipe bridals, pipes, dillas, doughnuts, 240 pampers, car, motorbike, lanes, lough, 240 Pond and no one died. <br /> Opportunity, Mrs. Khatiya has shown concern for provincial affairs, districts and villages that have been affected by floods, you have given directions to the law enforcement and the police. With this time you have brought 80 million kip, to help early emergency, then you, with the committee visited the people and see the real destruction of the homes affected by floods. <br /> According to the report of the Central Stage Management Committee on the same day, the central board of management has been led by Mr. Chanthong Television Ministry of Defense, Vice President of the Central Board of Directors, with the result of 50 Khamphaya Phompanya Deputy Governor of Bokeo Province, President of the Provincial Board of Directors. <br /> (The news of the horizon) <br /> <br /> Parts of northern and central Laos have been hit by floods after Tropical Storm Koguma blew across Laos over the weekend. Floods and landslides triggered by Tropical Storm Koguma have impacted residences and agricultural land in Vientiane Province, Xayaboury, Xiengkhouang, and Bokeo. Tropical Storm Koguma brought storms across Vietnam on Sunday, extending into Northern Laos and causing heavy rain throughout the country. <br /> <br /> Villages in Xayaboury District of Xayaboury Province have been hit by serious floods after days of torrential rain in northern Laos. Several villages in the district, including Nayao, Nator Yai, Nong Seng, Boung, Thin, Pong, Simueng, and Simoungkhoun villages have been inundated, according to a report by Lao National Radio. Deputy Provincial Governor of Xayaboury, Mr. Phetphixay Sounvilay, says over 3,000 people in the nine villages of the district have been affected by the floods. Government officials, police, military, and volunteers are working around the clock to assist households that have been severely affected by floods after heavy rain over the weekend, said Deputy Provincial Governor Phetphixay. <br /> <br /> Local authorities are providing temporary housing while utilities including water and power have been cut off in inundated areas, Vientiane Times reports. Governor of Xayaboury, Phongsavanh Sitthavong, is visiting the affected areas and has mobilized police and military units to provide assistance. A force of 1,000 soldiers and police from Xayaboury and Luang Prabang provinces have been mobilized to assist in rescue and relief efforts, He urged the armed forces and police to actively provide assistance to affected populations by helping clean out flooded homes and clearing debris. He called on police to ensure security during the crisis and prevent looting and theft.

As of 16 June 2021, at 18.00<br /> Affected areas in 7 provinces (Chiang Rai, Chiang Mai, Phayao, Nan, Phitsanulok, Uthai Thani, Ranong) 1,612 houses were affected, 2 schools, no injuries and deaths. current situation<br /> <br /> From the depression situation in the upper South China Sea is moving to the west. Slightly north is likely to intensify into a tropical storm. and moved into the Gulf of Tonkin and disembarked Upper Viet Nam. In addition, the monsoon trough still lies across the upper northern region and the Upper Lao People's Democratic Republic causing the northern and northeastern regions to have rain in some areas causing gusts, floods and soil slides during 12 Jun '64 - present. There are affected areas in 5 provinces (Chiang Rai, Chiang Mai, Nan, Phitsanulok, Ranong) 15 districts 28 sub-districts 75 m. houses.1,363 people were affected, 2 schools, no injuries or deaths.

On 11 June 2021, a flashflood incident occurred in five (5) barangays in Tantangan, South Cotabato due to heavy rains associated with strong winds brought by monsoon trough which affect the country and other areas in Mindanao.<br /> A total of 400 families or 2,000 persons were affected by the flashflood in Tantangan, South Cotabato<br /> There are 30 families or 150 persons currently taking temporary shelter in New Ilo-ilo Barangay Gym in Region XII<br /> A total of ₱422,150.00 worth of assistance was provided by DSWD to the affected families 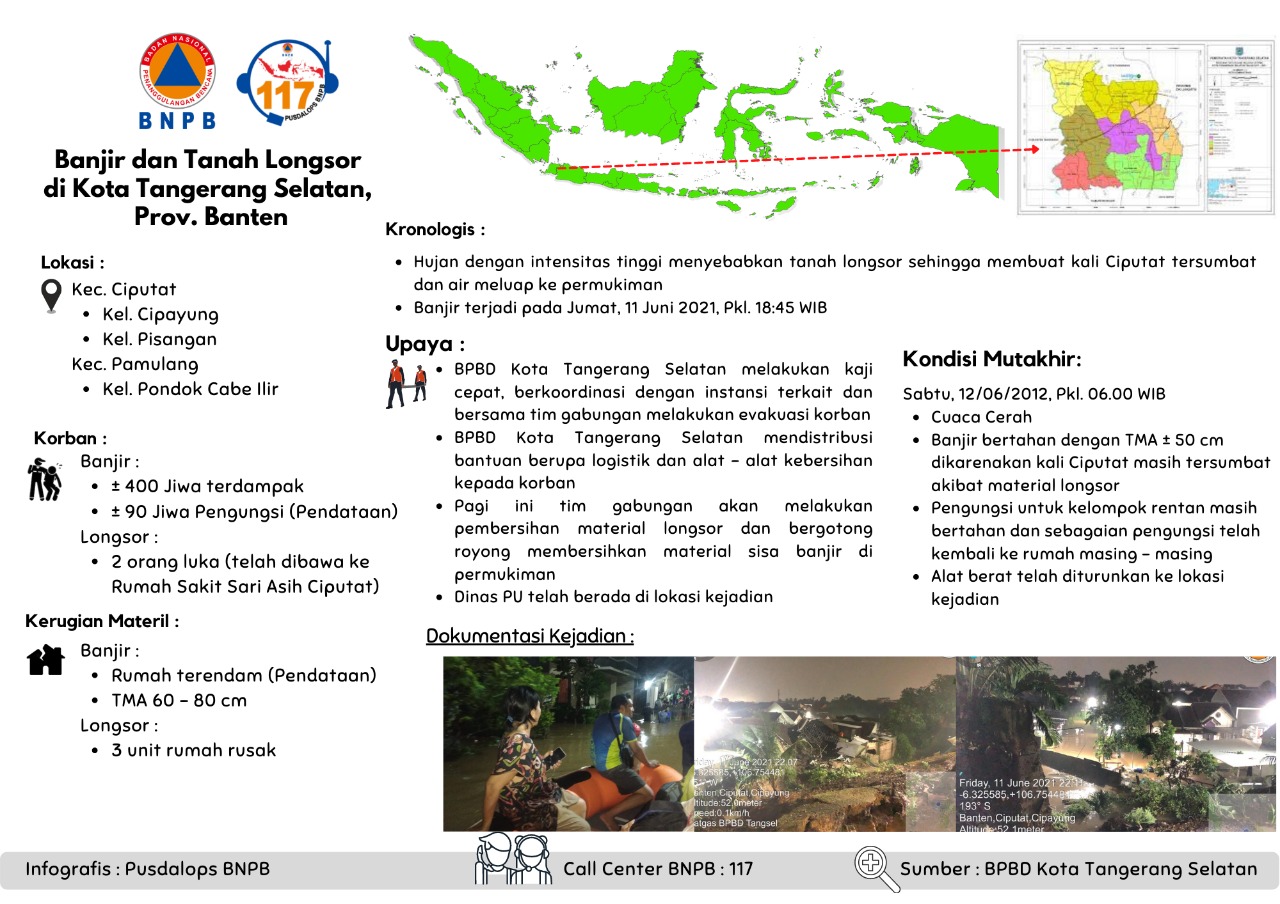 On 10 June 2021, around 5:00 PM, a land displacement was reported due to recurring ground shaking in Valderrama, Antique, leaving major cracks on the various location in Brgy. Igmasandig. Small cracks were initially observed by the residents and these further expanded approximately from 1 foot to 1 meter in diameter and still continuously expanding incurring more damages to the houses, structures, and lifelines. An immediate pre-emptive evacuation of all the residents within the affected area was conducted. The cause of the ground shaking/land displacement is for further validation of DENR-MGB.<br /> <br /> &gt;Pre-emptive evacuation of 85 families/280 persons<br /> &gt;No reported casualty<br /> &gt;16 houses were damaged (7 totally/9 partially)<br /> &gt;4 public structures were damaged (1 totally/3 partially)<br /> &gt;Powerlines were disrupted<br /> &gt;Brgy roads were damaged/depressed

On 05 June 2021, 5:40 PM, a flooding incident occurred in Bago City, Bacolod City, and La Castellana, Negros Occidental due to heavy rains with lightning and strong winds.<br /> <br /> A total of 390 families/2,070 persons were affected in 8 barangays. Of which, 12 families/65 persons are currently taking temporary shelters in evacuation centers while 341 families/1,274 persons are staying outside ECs.

DOST-PAGASA raised Thunderstorm Advisory No. 3 at 4:35 PM on 4 June 2021, indicating that some parts of Davao Region, including the Municipality of Sto. Tomas will experience moderate to at times heavy rainfall with possible lightning and strong winds due to thunderstorms.<br /> <br /> - 2,024 families or 8,760 in seven (7) barangays were affected by the flooding caused by the heavy rainfall<br /> - 19 families in Brgy. San Miguel initially sought temporary shelter on the onset of the flooding but has already returned to their respective homes 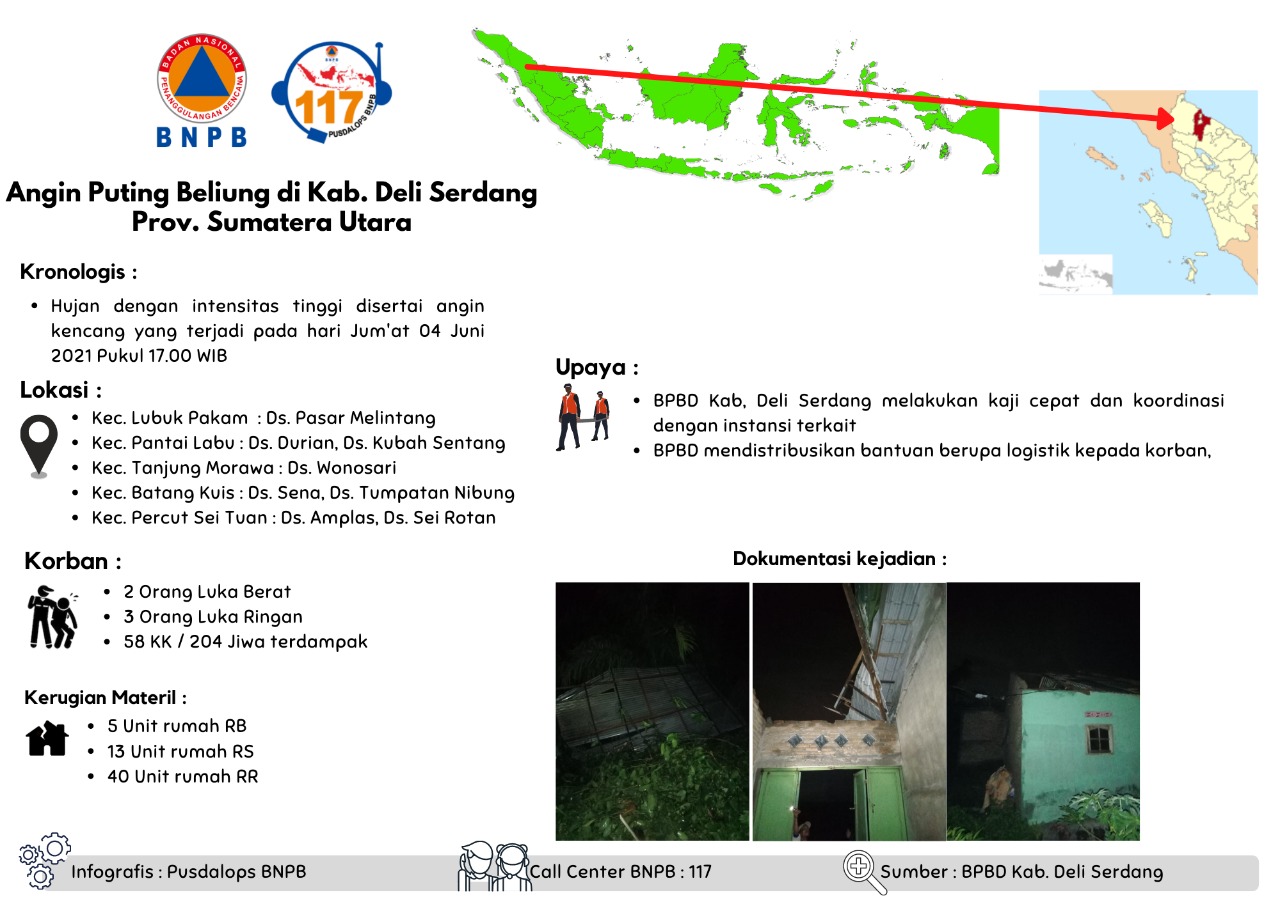